Red Snapper Season 2019 is upon us. Watching the storm over in the Gulf, it appears we dodged a weather bullet, but we could still get substantial rainfall. We just don’t know because the behavior of the storm is kinda unpredictable. Our red snapper fishery is as healthy as ever, with way more red snapper in our waters than there needs to be to maintain other health fisheries like the black sea bass, grouper, vermilion snapper, etc… with so many red snapper out there, guess what they are eating? All those fish I just mentioned, along with numerous other species! Nevertheless, the government was gracious and generous (sarcasm) enough to give us 5 days, and as a kicker, one of the weekends they give us coincides with the Greater Jacksonville Kingfish Tournament; brilliant!
Anyway, we get to catch red snapper this weekend, so lets talk about how to catch them! Red snapper are a voracious species that can be caught on a variety of baits including live, dead, cut, and even artificial. The most popular baits are usually live bait such as spanish sardines, cigar minnows, and thread fin herring. Among the favorit dead baits are spanish sardines, cigar minnow, and boston mackerel. Arificial baits include gulp shrimp, butterfly jigs, and other type of jigs with either plastic tails or feathered tails. You can even chum them up to the boat if you cut chunk baits and periodically pay it out behind the boat, they will eventually show themselves to you! You need to have particularly heavy gear for red snapper or otherwise they will break you off in the bottom if you can’t get them away from it. My preference on tackle is 80lb mainline with 80-130lb leader. You want to use a pretty heavy circle hook (federal requirement) so the big ones don’t straighten it out. You want a reel with a pretty hefty drag such as a Penn113H with a heavy duty rod that can really put some pressure on the fish. Tighten the drag on down, send the bait on down to the bottom, and buckle your seat belt. Pound for pound the red snapper can stack up against nearly any fish out there for power! Hopefully we will see you out there trying to catch one!! 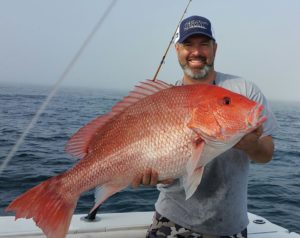 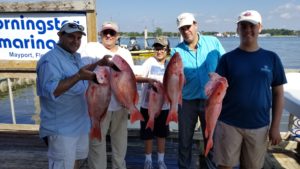 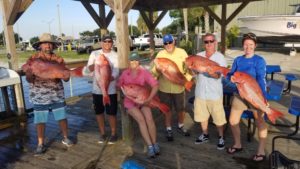 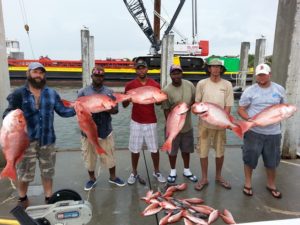 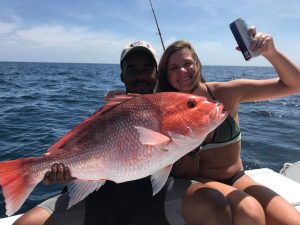 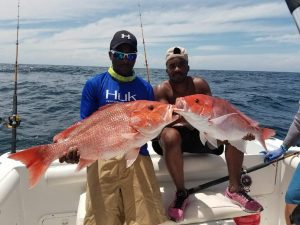